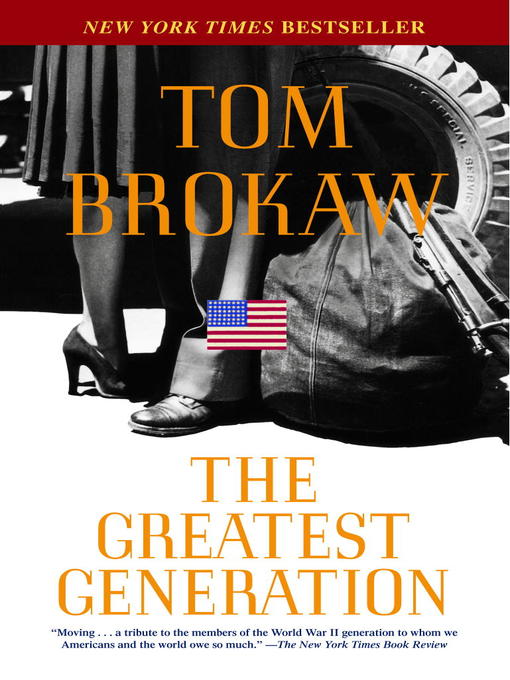 In this superb book, Tom Brokaw goes out into America, to tell through the stories of individual men and women the story of a generation, America’s citizen heroes and heroines who came of age during the Great Depression and the Second World War and went on to build modern America. This generation was united not only by a common purpose, but also by common values–duty, honor, economy, courage, service, love of family and country, and, above all, responsibility for oneself. In this book, you will meet people whose everyday lives reveal how a generation persevered through war, and were trained by it, and then went on to create interesting and useful lives and the America we have today.

In this book you’ll meet people like Charles Van Gorder, who set up during D-Day a MASH-like medical facility in the middle of the fighting, and then came home to create a clinic and hospital in his hometown. You’ll hear George Bush talk about how, as a Navy Air Corps combat pilot, one of his assignments was to read the mail of the enlisted men under him, to be sure no sensitive military information would be compromised. And so, Bush says, “I learned about life.” You’ll meet Trudy Elion, winner of the Nobel Prize in medicine, one of the many women in this book who found fulfilling careers in the changed society as a result of the war. You’ll meet Martha Putney, one of the first black women to serve in the newly formed WACs. And you’ll meet the members of the Romeo Club (Retired Old Men Eating Out), friends for life.

Through these and other stories in The Greatest Generation, you’ll relive with ordinary men and women, military heroes, famous people of great achievement, and community leaders how these extraordinary times forged the values and provided the training that made a people and a nation great.